Wondering about plan changes to the bridge benefit?

Find out how changes to the bridge benefit and lifetime pension may help improve your years of retirement if you have service before April 1, 2018

If there's one constant in life, it's that things change over time. Today, it costs more to buy a house and go to school, and the price of a bag of groceries can sometimes be a shock. Life expectancy and employment patterns, too, have changed – we're living longer and working later – and this is reflected in recent plan changes to the bridge benefit and lifetime pension.

Why this change is important

Keep in mind that early retirement features were put in place almost 50 years ago; the bridge benefit was designed as a short-term, temporary benefit that would bridge the gap between early retirement and age 65, when government benefits traditionally began. But now, people are retiring later than they used to, some are joining the plan mid-career and working longer, and those choosing early retirement can start collecting Canada Pension Plan benefits as early as age 60 (with a reduction). Moreover, the bridge benefit has a greater impact on employees who start contributing to the plan at an earlier age compared to those who start contributing mid-career – and this is not fair for all members.

How the plan is now more equitable

To better reflect the current working environment and make the plan more equitable, effective April 1, 2018, the lifetime pension accrual rate increased to a flat rate of 1.85 per cent and the bridge benefit was removed for service earned from April 1, 2018, onward.

This is good news because the rate increase will boost your long-term savings – as the lifetime pension accrual rate is one of the things used to calculate your pension benefit, along with salary and years of service.

HAS = highest average salary: the average amount of your salary during each of the highest five years of salary
* To a maximum of 35 years
Changes effective April 1, 2018, do not apply to public safety employees (including correctional employees and certain BC Ambulance Service paramedics in the Canadian Union of Public Employees Local 873 [CUPE]). The board anticipates these changes will take effect for this group in the future.

How your past service is improved

If you earned service between April 1, 2006 and March 31, 2018, inclusive, your lifetime pension accrual rate will increase from 1.35 to 1.65 per cent and the bridge benefit accrual rate will correspondingly decrease from 0.65 to 0.35 per cent for your salary below the year's maximum pensionable earnings (YMPE)

A salary limit set by the federal government each year for the purposes of determining the maximum annual contributions to the Canada Pension Plan. It is used as part of the formula to calculate your contributions and pension benefits on service earned before April 1, 2018. 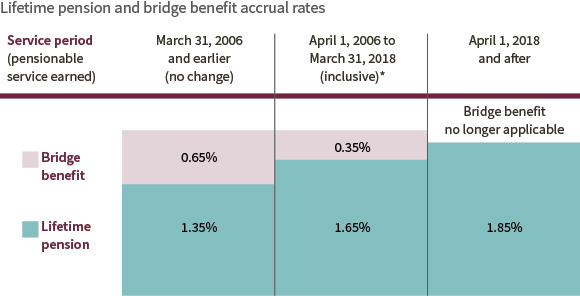 How these changes all work together

Since you're retiring eight years before the normal retirement age of 65, the bridge benefit amount you'll receive up to age 65 will reflect the percentage of your service earned in each of the three periods – in this example, only one year falls under the new rules (April 1, 2018, onward) where there is no bridge benefit.

(Note: if you retire early and your pension is reduced, any bridge benefit that applies to your service will also be reduced; this calculation will be incorporated into the estimate you receive on your annual member benefit statement or in My Account.)

Your plan is fair and forward-thinking

Remember, the plan is designed to provide financial stability in retirement that is fair for all members; recent plan changes also help improve lifetime pensions for members overall. In a shifting world, it makes sense to plan for the long term, and your pension plan can help you face the future with assurance.

Related content for Wondering about plan changes to the bridge benefit?

When you can retire

What is the year's maximum pensionable earnings?